Are you looking to purchase tickets for a concert hosted by R5 Productions? If so, visit their website www.r5productions.com.

R5 Productions widget and many other great free widgets at Widgetbox

Documentary about R5 concerts at "the Church" 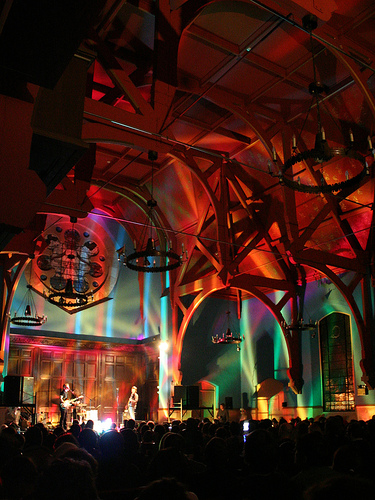 Had you been at the First Unitarian Church of Philadelphia on Wednesday night, you would have had the good fortune to see St. Vincent in the flesh. No, not that St. Vincent. Not the 17th-century French patron saint of lost articles, but rather Annie Clark, the doll-faced multi-instrumentalist and singer better known by her stage name St. Vincent. She’s a triple threat: Bjork’s eccentric personality, Feist’s ethereal voice, and Amelie actress Audrey Tautou’s small figure and big eyes. With her 2007 debut record still ringing in fans’ ears, Annie has been touring. On Wednesday night, the venue was the First Unitarian church. Not exactly your typical backdrop to an indie rock show, but then, this isn’t your typical church. Unitarians are non-doctrinal, accepting folk, so Annie’s hip, underground music fits right in as do most other things. The church has ceremonies of union for gay and lesbian couples, vegan dinner meetups, Fair Trade coffee. A racial justice action group, classes on feminist theology and Native American spiritual practices, a monthly Happy Hour. It’s all there. And on top of promoting tolerance throughout its own programs, the church opens its doors to various community events like the St. Vincent gig. Since the mid-1990s, R5 Productions has been renting space from the church and putting on indie and punk-rock shows at night. Not every church would rent out its space to alternative bands. God knows religion and tolerance don’t always go hand-in-hand. But the First Unitarians are an open-minded bunch and they’re proud of it: “It’s a feather in their cap,” explains Mike McKee, the church’s administrative assistant. Sporting a navy adidas tracksuit top, old-school jeans, a bristly beard, and little spectacles, McKee is also a local musician. A one-time punk show promoter, the religiously “undeclared” and non-Unitarian McKee came to work for the church through his ties with R5 Productions. With one foot in the music scene and the other on sacred grounds, McKee exemplifies how this is a story not just about happy coexistence but about overlap as well. According to Rev. Nathan C. Walker, the church’s openly gay minister, several members of the congregation have come from the concerts. McKee, who processes the visitor forms every Sunday, occasionally gets one from someone who, having frequented R5 shows for years, one day decides to check out the church itself. The opposite happens as well. One elderly church member goes to many of the R5 shows and later posts concert photos on the church’s Flickr page, where, says McKee, “you’ll see a photo from bingo night and then right next to it there’s a shot of a topless, sweaty singer shouting into the mic.” But not all the church members show interest in the music, nor do all the punk fans make it out to a Sunday service. Still, the music-lovers and believers all share common ground: the same gothic building, the same insistence on being themselves. In fact, this focus on individuality is at the church’s core. An intentionally diverse Unitarian Universalist congregation, the First Unitarian Church has no preconceived dogma – its members include Neo-Pagans, Buddhists, the Spiritual-but-not-Religious, secular Jews, liberal Christians – and has a rich history of acceptance: back in the early 19th century, the church’s first minister, Unitarian William Henry Furness, had an armed guard for some time, because he was seeking to abolish slavery. As for the church’s Universalist side, Universalists hold the achievement of “being the first denomination to ordain women in America, the first to say, ‘there is no hell, God is love,’” says Rev. Nate. It is this very open-mindedness that permeates the congregation’s attitude toward the R5 shows. “Bands will sometimes ask us,” says McKee, “’Look, we’re called Death Vomit or Impale Jesus – is that okay?’” Thoughtfully clutching his bearded chin and adding a jolly flair to his voice, McKee impersonates a church member: “Well… Death Vomit – now that’s interesting. It’s not really my cup of tea, but that’s interesting.” Reverting back to his own voice and re-crossing his arms, McKee clarifies that the congregation has an intellectual attitude toward the music, which is why colourful band names like Impale Jesus don’t ruffle any feathers. Besides, a belief in Jesus isn’t a necessary part of their faith. There are no necessary beliefs. Only this, their long-standing motto: “We need not think alike to love alike."
E-mail me when people leave their comments –
Follow

You need to be a member of philauu3 to add comments!

This reply was deleted.